America: Denver and Denvention, Day One

Tuesday August 5, after returning to Europe from the Asian part of Russia, it was time to visit the third continent in the same week: America.
After an uneventful flight from Amsterdam through Detroit -- nice Irish pub on the C-concourse -- to Denver I met TTAPress publicity maverick Roy Gray and our new electronic editions editor -- who had started up the new Transmissions from Beyond podcast the day before -- Pete Bullock. Pete drove Roy and me to our respective accomodations, and since it was close to midnight, which felt like 8 in the morning on my West European Time, I went to bed. Without a beer: but I would make up for that in the days to come.
The next morning -- let's call Wednesday August 6 Denvention Day One -- I went to the Colorado Convention Center to help Pete and Roy set up the dealer's table, but they wouldn't let anyone in without a badge. The registration line, though, had already stretched over 50 metres. Luckily Pete was already in there setting things up, and Roy was almost up ahead in the line, so without feeling much guilt I went to the Sheraton lobby to meet up with the esteemed Jim Minz.
The plan was a pubcrawl as a way to kickstart Denvention, but apart from me and Jim -- whose idea it was -- none of the usual suspects showed up. Fully understandable, with dealer's tables, presentations and art shows to be set up, and we were going to repeat the pubcrawl on Sunday afternoon. Still, it's vitally important to do some scouting ahead, and, selflessly sacrificing ourselves, we put to the task with vigour.
First s

top was Stranahan's, the distiller of 'straight rocky mountain whiskey'. Jim and I and a third gentleman whose name escapes me took a tour at eleven AM. I've been on a few tours of Scottish whisky distillers (whisky or whiskey? See (1)), and what I noted here was that they use a custom-made distillery vessel that is somewhere in between a traditional pot still and a commercial distillery column, which brings their whisky somewhere between bourbon and whiskey. They also keep their casks -- American oak, obviously -- at summer temperatures year-round, at a controlled humidity, to speed up the aging process, so they achieve -- or claim to achieve -- the same maturation of a 6-year-old Scotch in two or three years.
The proof of the (pudding) whisk(e)y is in the (eating) drinking. So Jim and I had our firs

t drink of the day at eleven thirty: tasting Stranahan's whiskey I said: "Jim, we can only go downhill from here." Not specifically meaning the whiskey -- which was very nice, but no match for a good Scottish single malt -- but more the fact that all other beverages of the day would have a lower acohol content. We each bought a bottle: the top of my bottle was cracked by Ian McDonald, Lou Anders and me to celebrate the end of the Pyr party on Friday night, the rest I donated to the Baen party -- hosted by the indomitable Mr. Minz -- the Saturday night after. I had already bought a bottle of Camus XO at Schiphol, and could only import one bottle of booze tax free, so the Stranahan's had to go. Which it did.
Next up was the 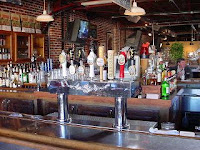 Breckenridge brew pub, which proved to be -- at least to me -- the best one we visited in Denver. A great selection of beers, and some nice food (although we only found the latter one out on the Sunday, because the macaroni & cheese wedges don't count: while quite OK, they reminded me of their Dutch counterparts nasischijf and bamihap).
The Agave Wheat and the SummerBrig 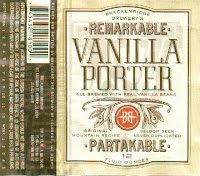 ht Ale were fine drinks, but the Vanilla Porter was the big surprise: imagine a near-perfect mix between beer, coffee and chocolate and you some idea of how it tasted. Quite incredible and very, very good.
Then there was another microbrewery, a bit out of the way, whose name I forgot, which was closed on Sunday. Also quite good, although it was beer only there, with just a few snacks.

Then we went to Falling Rock taphouse, and this place rocks! Over 69 beers on tap: both local and international ones (plenty from Belgium, but at prices -- hey: I live 50 kilometres from the Belgium border. We have Belgium beers, cheap, in our supermarkets -- that gave me pause, even at the current exchange rates). We did a lot of tasting there, together with a local beer enthusiast. Grabbed some excellent onion rings and breaded m 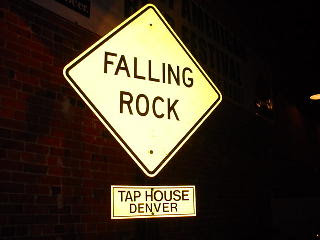 ushrooms -- that's why beer makes you fat: the greasy food that goes so well with it -- as well. We actually played with the idea of having the whole place relocated to straight across the convention center, as to make it the Con bar, but unfortunately we couldn't make it work. However, we did both get a classic "NO CRAP ON TAP" yellow sticker. Love this place! 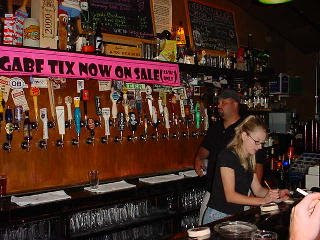 We liked it so much in Falling Rock that we had to skip a few other candidates on the list, as we had to get back to the Convention Centre to set things up (and get registered first). On our way, though, we did make a quick stop at the Rock Bottom Brewery, which is close to the pedestrian shopping area. Subsequently, it was very busy down there, but there beer list was impressive. I believe it's become something of a national chain, which, for once, I'll recommend.

Then, at the end of the afternoon, I got registered and checked our table in the dealer's room: Roy and Pete had it set up perfectly, and Pete was even setting up two laptops with headphoes and speakers so that people could listen to our first three podcasts (" ). Great dedication to the cause here.

After the dealer's room closed at 6 PM, it was time (again) for some beer: I checked out the bar in the Hyatt -- across the street from the convention -- and it soon became clear that this would become the central bar of the Con.

(1) snarched from here:
The Bard of Banff
Whisky or Whiskey?
A Scotsman who spells
Whisky with a n ‘e’,
should be hand cuffed
and thrown head first in the Dee.
In the USA and Ireland,
it’s spelt with an ‘e’
but in Scotland
it’s real ‘Whisky’.
So if you see Whisky
and it has an ‘e’,
only take it,
if you get it for free!
For the name is not the same
and it never will be,
a dram is only a real dram,
from a bottle of ‘Scotch Whisky’.
Stanley Bruce.
20th April 2004
Ironically, though, according to Wikipedia, Whiskey was re-adopted by the Irish back in the 1870s 'to distinguish their higher quality product' (because 'the reputation of Scottish whisky was very poor '). How the times have changed.
Posted by Jetse de Vries at 1:35 PM No comments: