The Optimistic SF Debate Goes On...

...through Damien Walter's Guardian blog post, with Kathryn Cramer (comment 74) reacting on the Tor beta website.
If I understand Kathryn's argument correctly, her central argument is:

I don’t think SF can be held responsible for finding solutions to all the world’s problems, but I think it is SF’s task to help us understand them.

I have heared this argument before, and I think it's a bailout. It's the old chestnut that dystopias show us what's wrong with the world today, and what will happen if this goes on, so that we will not do it. That's one-sided: we tell people what they should not do, but not what they should do. Like saying what is bad without even trying to give a good alternative. While SF can't be held responsible for finding solutions to all the world's problems, it should at least try to look in the right direction. And pointing the other way saying that *that* is the wrong direction is not the way forward.
Now, I fully agree with Kathryn's impression -- namely that the majority of the stories she (and her husband David Hartwell) read for their Year's Best SF anthologies (and for their YBSF 13 particularly) are, indeed, very much 'reflect reality', and are thus downbeat.

While conventional wisdom dictates that readers tend to prefer more up-beat SF and that the Eeyores of the SF field just don’t sell, what I find as an anthologist picking stories during wartime and in the midst of the unfolding of various other dystopian scenarios is that a lot of the best SF and fantasy lately is really dark.

My problem is: must SF *only* reflect the current world? Or might it look beyond our current problems? Kathryn doesn't seem to think so:

I also don’t think that providing rays of sunshine through the storm clouds is really the solution particularly, nor necessarily the most workable aesthetic choice, unless you are in Hollywood.

Here is where I disagree with her. She even ends her post with:

So, to answer his question, Does SF have to be so gloomy? I guess my answer is that for now it does because it is in touch with the world we inhabit right now.

Make no mistake: I regard Kathryn, as an editor, very highly. I greatly disagree with her on this point: what happened to the SF that dared to make audacious predictions? The SF that, for better or worse, dared to go into the great unknown? That dared to lead, and make mistakes?

If I understand her post correctly, 'cultural forces much larger than the SF field' will more or less define SF's agenda. Say again? Since when did that stop Olaf Stapledon? Arthur C. Clarke? Ursula LeGuin? John Brunner? Greg Bear? Bruce Sterling? Greg Egan? Ian McDonald? And more writers I can remember right now who tried to transcend the zeitgeist (cue to Bruce Sterling's eponymous novel, OK, but contrast it with Islands in the Net, Holy Fire and Distraction) and write about what will change?

My opinion (especially at this point in time, but also in general) is that SF stories where something changes for the better -- and I'm not talking mindless Polyannas here, but stories where progress, even a small amount of it, is achieved against the odds, is hardfought -- are not only in the minority, but in the minority both because convincingly optimistic stories are much more difficult to write (people tend to believe a story where everything goes down the drain much easier than one where things change for the better), and because the majority of the SF community (writers, readers, and editors) seem to be too mired in the current downbeat zeitgeist to rise above it.

Now shoot me, but I like to think SF that's really audacious, gutsy and forward-looking dares to make predictions against the flavour of the month. Dares to make totally unexpected predictions, and -- in the process -- dares to be wrong: but nevertheless inspires others to carry the torch of progress.

Depicting a world like today that's going down the drain is easy: people love to complain, and blame the world's problems on someone else. Depicting -- convincingly -- a world that changes -- even if marginally -- for the better, is much more difficult, for an SF writer.

One cliché has it that writers (and specifically SF writers) like a challenge. I'm not so sure: I think most SF writers like a small challenge, like trying to write an elf story for an editor who doesn't like elves. As readers of this blog know (all five of you...;-), I'm looking for SF writers that like the big challenge: write something that rises above the current problems.

Because if everybody -- like Kathryn Cramer says, remains in touch with the world we inhabit right now -- is gloomy, then *nobody* will invent higher efficiency solar cells, better alternative energy solutions, improved agricultural practices, innovative sustainable living methods, and so on.

Indeed: while we expect companies, inventors and innovators in real life to come up with solutions to the problems we are facing today, why should SF bail out of that discussion? Because it's not popular?

Please correct me, but I understand that in his time, Galileo's worldview was far from popular (it nearly got him hanged). But it didn't mean he was wrong. OK: this might be overstating the case, but I do remain that most innovators have had to overcome a lot of resistance of their contemporaries, because these contemporaries refused to believe that these unpopular visions could be correct (a boat made of steel could not float; a vessel made of metal could not fly, and there are multitudes of similar examples).

Now I do understand that Kathryn Cramer works for Tor, and that Tor needs to sell books, and presumably books that concur with the currently held consensus sell better than those that go against it. So the Year's Best SF follows the zeitgeist and is filled with downbeat stories (also because daringly upbeat stories are thin on the ground).

Now you can shoot this naive idealist, who prefers to invest his surplus income in sustainable banking, and believes in innovation and progress: but if there are so many -- yes, there have been lots of failures, as well: that hasn't stopped others from trying -- innovators succeeding (for example, on the day job there was a shipping company that were to first to try the sky sail: these people were willing to try this innovation, but were mildly skeptical at the result. What happened: the system performed above expectations) in real life, why is SF lagging behind?

Yes, I will admit to being ashamed: I love SF, and like to think it's forward-looking. But if the things I see at my day job are quite often more innovative, forward-thinking and imaginative than SF, then I feel really, really ashamed. I train young people, from all over the world, at my day job, and let me tell you that they are, almost without exception, upcoming young professionals that believe that they can change their future for the better. They're (mostly) not interested in contemporary SF, because it doesn't speak to them.

I am extremely tired of SF that shows how the world goes to hell: it's the most defining characteristic of modern SF. The real world is developing more initiative than the literature of the future, the literature of change, and this is one of the main reasons why SF is becoming so irrelevant.

SF is reactive, not proactive. SF is following where it should lead. SF is empasizing the gutter, not looking at the stars. No wonder it's becoming obsolete.

Written SF is losing its contact with the (potential) young readers (or whatever was left of that, the cynical part of me adds). While publishers are finally changing the medium (from paper to electronic) in order to reach new audiences, I strongly believe that even with a new medium nobody will be interested if the message doesn't hit home.

So do we win a new, young audience by telling them -- however eloquently -- that their world will go to hell, or by telling them that they can at least change some things for the better? It's even worse: most of the young people -- the professionals of the very near future -- I see aren't waiting for SF: they're already doing it themselves.

In my day job (where I work for a propulsion company), I train both our own technicians and customers to work with our installations. In my experience, most of these people (yes, both our own technicians and customers) are not only focused on troubleshooting -- which is very important -- but also try to find ways to prevent problems. Sharp people that often ask me difficult questions, some of which I can't immediately answer (I need to get more info from engineering). Quite often, these people not only learn things from me, but I learn a lot from them, as well. And always -- without exception -- when we acknowledge a problem, we are then fully focused on a solution.

We may not get that solution, but it's certainly not for lack of trying. Therefore, while SF indeed can't be held responsible for finding the solution to all the world's problems, that doesn't mean it should not try to attack at least a few of them.

Pointing to the problems is not enough (no matter how eloquently done): thinking about the solution is required. If -- at the day job -- I would only point to the problem, and do nothing else, I would get fired. I'm supposed to think about a solution, be helpful towards that.

Therefore, if SF isn't, at least, trying to pave the way towards solutions (and not be afraid to be wrong), then it will become... 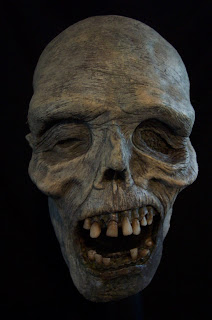 (if it isn't already)

Realistically optimistic SF is not a luxury, nor an impossibility. It is essential if SF wants to be relevant. Otherwise SF will become/remain(*) a nostalgic enterprise for baby boomers.