At the Crossroads of Hardrock/Heavy Metal & Science Fiction, part 1: UFOs

I've been thinking about the overlap between these two art forms before (as I am a fan of both), but triggered by this blog post by John Scalzi I decided to tackle it, but piece by piece. There is a lot of overlap.
So let's begin slowly, with the most prominent example: 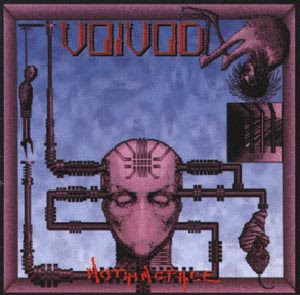 Probably the band that's done the most incorprating of SF into metal (or vice-versa) is Voivod. UFOs and aliens are a recurring theme throughout their albums. Directly in -- for example -- the "We Are Not Alone" and "Jack Luminous" (more an epic) songs of the The Outer Limits album, and somewhat indirectly in other songs, for example check this video of "Clouds In My House" (from the Angel Rat album):
One of their more original takes on UFOs is in "The Unknown Knows" (from the Nothingface album, their best), which is about a legend among Native Americans about UFOs. Below is a live video of it:

On their 10,000 Days album, Tool's "Rosetta Stoned" hails of the adventures of a guy who believes he has been abducted. Since the story is told from the abductee's viewpoint it's carefully left ambiguous if what happened to him was real or not, but the way in which the song superbly crams almost each and every cliché of the UFO legends and sharply typifies its staunchest believers I suspect this is either a great satire, (singer James Maynard) Keenan is a true believer, or both (especially since he sings "I ain't opened my third eye" on the Aenima album).
There are literally hundreds of live videos of that song on YouTube, so I took one from the Lowlands Festival (which is in The Netherlands):

Tool, though, are most probably pulling your leg. However, when it comes to UFOs and metal, Agent Steel's debut album takes the cake (and eats it). Skeptics Apocalypse (gotta love the title) gives short shrift to those who think Unidentified Flying Objects filled with aliens are just a figment of the collective imagination. Singer John Cyriis was a true believer and this added an extra dimension. From the wildly galloping opener "Agents of Steel" (see the live video from the Dynamo Club(*) below, and witness how Cyriis voice rises -- at the fourth iteration of the 'masters of metal, agents of steel' chorus -- through a steel-splintering number of octaves) to the call to "Bleed for the Godz", and reaching its zenith with the duo of "144,000 Gone" ('twas more than just a few that were abducted) and "Guilty As Charged" (the human race, who else?).

Agent Steel (the latest iteration sometimes tours, AFAIK) has made a few more albums with John Cyriis, but none of those quite have the weird combination of full throttle speed metal with the Cyriis UFO madness.
Anyway, these are the ones that come from the top of my head. Does anybody have other recommendations?

(*) And what can I say about the old Dynamo Club (the youth centre in which it was located has been demolished and replaced by a modern one, with the 'new' dynamo club and bar)? Back in the 80s and 90s it was the place to be if you were into heavy metal, and the club has hosted numerous legendary performances. I believe that at that time the official maximum number of people allowed inside (from the fire regulations) was 75, while most soldout shows held more than 300 people. To say it was sweaty and crowded was an understatement: it was a seething pit of chaos, while at the same time the coolest place on Earth (for a metal fan). No wonder we drank so much beer: it was the only way to keep our temperature down!
Posted by Jetse de Vries at 1:01 PM 2 comments: