Thursday April 12 Jeff Martin gave an acoustic show in the Willem II, a concert venue in my home town of Den Bosch. Jeff Martin was the frontman of Canadian rock trio The Tea Party.

(OK: I know I've gotten behind on my blogging: that's what real life does, right?)
The first time I saw The Tea Party was also in the Willem II, some ten years earlier. At that time there was still a record shop specialised in rock and alternative music -- it was called Elpee -- and Paulus Tops, the shop's owner, urged me, in no uncertain terms, to go to the Tea party gig in the Willem II. I didn't know the band yet, so was reluctant to go. But Paul's enthusiasm was so great, that I hardly could not go.
(Aside: I miss that shop: through it I found out about bands I might never have known about. Say what you will of the internet and the blogosphere: in my opinion nothing really works as well as talking to people in the flesh.) 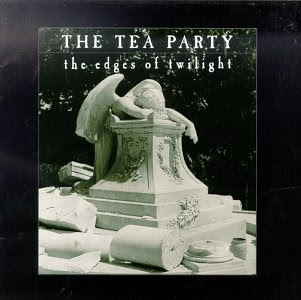 So I went, and it's still one of the very best -- possibly the best -- shows I saw in the Willem II. Their second album The Edges of Twilight was just out -- still easily my favourite album of them -- and they played everything from it, often in extended versions.
For example, "Turn The Lamp Down Low" was followed by an outro in which the complete band were playing a variety of drums. Throughout the gig, the band used several non-western, acoustic instruments, which were fully integrated in the songs.
I was completely flabbergasted.
I've seen The Tea Party quite a few times since then -- mostly in Holland, obviously, although I saw them once in New York when I was there for the day job -- but no matter how good these shows often where, none quite captured the magic of that show in the Willem II (they played there again, but I missed that show because I was out of the country: I travelled a lot at that time). 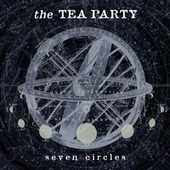 Then the news came that Jeff Martin quit the band just after they released their latest album: Seven Circles. I quite liked Seven Circles, and was hoping to catch the band live once again (they regularly toured Europe: I believe that they were very popular in three countries: Canada [their home country, and this probably paid most their bills], Australia, and The Netherlands. They never quite made it in the USA, while Celine Dion did. Oh well), but it was not to be.
Instead, Jeff Martin needed to get back to his spiritual and musical roots. I don't mean this as a put down: after the Jeff Martin/Wayne Sheeley show I had the opportunity to talk -- albeit shortly -- to Jeff after the show in the bar, and I got the very strong impression that Jeff needed to do this: refill his spiritual reserves after a very demanding time. I really try to understand that.
.
The two comparisons that come to mind are Marillion/Fish and Kansas.
.
Fish -- the singer -- left Marillion because -- as far as I can tell -- the continuous touring took its toll. Marillion was doing fine in the UK, but didn't quite break through in the USA. Some artists take long tours well, supposedly Fish was not one of them. So he quit, and personally I think the parts (Marillion minus Fish; Fish minus Marillion) never quite added to more than the sum.
Kansas had an almost similar problem back in the early 80s: they *did* have a few hits in the 70s (Dust In The Wind, Carry On My Wayward Son), but didn't have more hits after that. So first Steve Walsh left the band (to be replaced by John Elefante), and when the Vinyl Confessions and Drastic Measures albums didn't bring forward any hitsingles, Kerry Livgren left (as did John Elefante), Steve Walsh returned, and the band brought in guitar player extraordinaire Steve Morse.
.
Two albums were released: Power and In the Spirit of Things. As Steve morse later commented: the band was under immense pressure from the label (MCA) to write a hit single. They tried, especially on the In the Spirit of Things album. But they failed to produce a hit, while both albums are awesome. They are the Kansas albums I play all the time: more than their classic Point of Know Return and Leftoverture ones.
.
(Hence my theory: an artist can create great art while inspired, but not necessarily *popular* art. Still, an artist should produce inspired art, and worry about succes later. Which doesn't pay the bills, I know, so where are today's Maecenas?)
.
So there's The Tea Party: succesful in Canada (25 million people), Australia (20 million people) and The Netherlands (16 million people). While certainly nice, to the label it probably didn't quite count as much as breaking through in the US (300 million people). Hence all the US tours, which eventually wore Jeff Martin out (like they did Fish).
.
It's unfortunate: while I did enjoy Jeff's acoustic gig (and there's a taster on Youtube here), I'm afraid his solo ventures will never quite reach to the heights like The Tea Party did. While I understand and respect Jeff's choice, I'm sad that the band was, well, disbanded. I certainly hope Jeff's solo carreer proves me wrong, and I'll certainly check him out again when he plays our lowlands.
.
Still, I am a little sad.
.
(And why the '.'-s? Because blogger, for some reason, won't let me make spaces between my paragraphs. Maybe I should move to Wordpress?)
Posted by Jetse de Vries at 6:38 PM