While one part of the SF community was at Nippon Con in Yokohama, and another part at Dragon*Con in Atlanta, I stayed in The Netherlands. Not that it made my long weekend any less intense.

So here's the report of someone who didn't go (well: I was at both WorldCon and Dragon*Con last year, so I know what I'm missing).

Friday August 31 I went to Anvil who played in the new Dynamo club in Eindhoven, with my brother and various friends.

Both Anvil and the Dynamo club have quite a history in heavy metal circles. From its inception in the very early 80s, Dynamo quickly became the beating heart of the Dutch heavy metal scene. Actually 'Dynamo cafe' was only a part of Eindhoven's 'youth centre' building, which was a five story building. The bar was in the cellar, and the venue (which had a fire safety capacity of 75, but more often than not was filled with 300+ people) was on the ground floor. 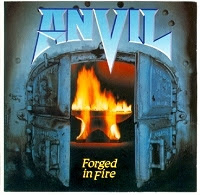 Legendaric gigs have taken place there, and indeed Anvil was one of the bands to play there in the early 80s. At that time, Anvil was on the verge of a breakthrough: the band had released three very good albums in quick sucession -- Hard and Heavy, Metal on Metal and Forged in Fire -- and propelled by the New Wave of British Heavy Metal (who on their turn were propelled by the Punk movement) they were on the forefront of what later came to be speed metal.

Especially Forged in Fire is still a bit of a forgotten classic, but back in '83 it seemed that Anvil was leading the speed metal pack. Problem was, they didn't follow through, as they didn't release a follow-up to Forged in Fire until 1987. Strength of Steel was too little, too late, as by that time bands like Metallica, Megadeth, Anthrax, Slayer, and many others had overtaken them. 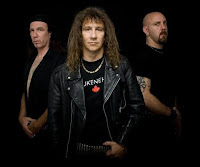 In retrospect, I also think they didn't quite have the quality and will to develop of the afore-mentioned bands. Anvil has released 13 albums by now -- the latest one being This Is Thirteen -- but none of the ten albums after Forged in Fire quite captured the energy and grit of the first three. Anvil never improved after that.

My brother remained a staunch fan throughout the years, and if they play in Holland we always try to take a look. So now they were playing in the *new* Dynamo (the old building was demolished, and now Eindhoven has a new 'youth centre', again with a hardrock cafe -- which is in the cellar -- and a venue. Typically, Anvil didn't play in the new venue, which can hold up to 600 people, but in the cellar, for about a hundred mostly old fans. Of which my brother and I were two.

The band has become a trio, and the second guitar player was sorely missed. Also, they tried to promote quite a few new songs from the latest album, while the majority of the audience came for the old classics like "March of the Crabs", "666", "Metal on Metal", "Winged Assassins", "Motormount", and "Mothra", which they all eventually played.

All in all, it was a very nice evening: after the gig there was an 80s metal party where we drunk and partied like we did 24 year ago. Of course, my brother complained that the DJ didn't have enough of the old classics, and the next morning I found out that I really wasn't in my early twenties anymore.

But that day, another gig was planned...
Posted by Jetse de Vries at 6:35 PM