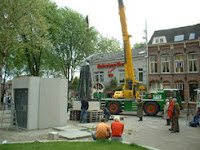 On Sunday September 2 I wanted to go to the second Threshold gig in 'de Boerderij' (i.e. 'the Farm') in Zoetermeer. That venue has a much better sound than Plato in Helmond, and a better atmosphere.

However, I had other commitments. Patric, one of my best friends, was getting married (again, I'll get to that in the next post), and his friends had organised an impromptu bachelor party on this Sunday. There simply was no way I couldn't go.

So, from about 2.30 in the afternoon onwards, we had a few beers at Café de Uni 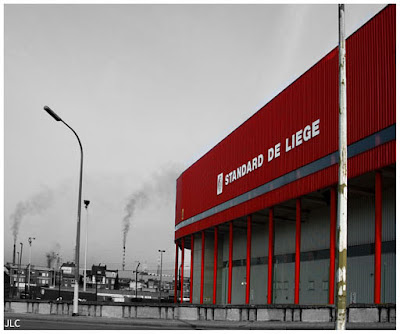 e in Den Bosch. Then the nine of us went to Luik (or Liège as the Flamands will have it) to watch the Belgium football classic Standaard Luik -- Club Brugge.

Patric is a huge fan of our local football team FC Den Bosch, and for a reason that's not really clear to me FC Den Bosch have friendship ties with Standaard Luik. So tickets were arranged -- no small feat as this was a sold out game -- and with a van we went south.

Luik is not a pretty city: my impression, driving through it, was of that of an old industrial mining town whose mainly old buildings looked more like they belonged behind the old Iron Curtain than in modern Europe (on the other hand, the new TGV station was being built, as well). Anyway, I think the picture of the red football stadium (standard de liege) against the smoking chimney background nicely captures my impression.

It was very busy around the stadium and -- this being Belgium -- there were plenty of snackbars where one could get some fast food (more difficult for Patric, who's a vegetarian, and his choices were rather limited). The atmosphere was relatively relaxed (in Holland I suspect the atmosphere would be much more tense with such a game), and we entered the stadium without a problem (after having a few beers in a local bar. And in the van. And in the stadium, as well). 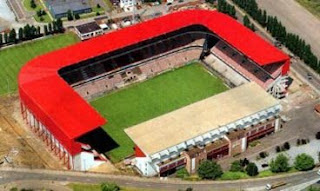 Standard Luik eventually won 2 to 1, in a game that wasn't really exciting, apart from the few minutes in which the goals fell. I'm not a big football fan myself, but according to my friends the atmosphere was a bit too tame ('the stadium should be boiling over during such a match!').

We had more beer, more fun, and eventually went back home to arrive around 2 in the morning which was double fun as most of them had to work the next day (I had taken the week off, luckily).
Posted by Jetse de Vries at 7:40 PM